On a cold and windy day not so very long ago myself and a gang of fellow cycle enthusiasts made our way out to the Science Museum’s “archive” in Swindon, for The life of the bicycle, a film being made by Clapham Film Unit with the friends of the Herme Hill Velodrome and the Science Museum.

The archive is really a huge great airbase, filled with hangers, filled with what can only be described a stuff, cool stuff, like a scaled up version of my granddads workshop or a old school Doctor Who set.

The Science Museum is planning a display of bicycles in the autumn as part of a movement themed display. For this project we were allowed access to the museums collection. (Squeak!)

The first space we went to was a workshop area, in which bikes being considered for display were being readied for shipping to central London. Science Museum curator Dennis-Kelles-Krause was on hand for questions. Although Dennis stressed bicycles are not his area of specialty, he was both knowledgeable and helpful as we skipped about gleefully (well, ok, I did, the others had more self control) discussing each bike and considering point of interest for further research.Much of our time was spent taking pictures, posing questions and exploring potential answers with Charlotte Bill, the films directors recording our ramblings.

My job was to collect our questions as the base for further research back at Science Museum HQ, this blog is that list, mixed in with other ramblings and pictures. It is about this point in writing this post that I realise I have enough material to bore normal people to tears and that this might take more than one post, so this is the first of, well however many it takes, I’m guessing three.

One you are in the room with an “original” its hard to focus on anything else, I can imagine everyone stopping and staring open mouthed when these first peddled past.

Commonly know as a Penny Farthing, these were the first fixies. This one is a Windsor and dates from 1878

Its hard to imagine anyone maneuvering hills on one of these, but Rodger Crosskey highlighted that fact that a poem was written about just that!

Going down Hill on a Bicycle: A Boy’s Song

With lifted feet, hands still,
I am poised, and down the hill
Dart, with heedful mind
The air goes by in a wind.

Swifter and yet more swift,
Till the heart with a mighty lift
Makes the lungs laugh, the throat cry:-
‘Oh bird, see; see, bird, I fly!

‘Is this, is this your joy?
O bird, then I, though a boy,
For a golden moment share
your feathery life in the air!’

Say heart, is there aught like this
In a world that is full of bliss?
‘Tis more than skating, bound,
Steel-shod to the level ground.

Speed slackens now, I float
Awhile in my airy boat;
Till, when the wheels are scarce crawl,
My feet to the treadles fall.

Alas, that the longest hill
Must end in a vale; but still,
Who climbs with toil, whereso’er,
Shall find wings waiting there.

Or you could imagine it another way…

It’s hard to imagine how rich the original owner of this “Baby Penny” as I have decided to call it would have been, or how hard it would have been to learn on, I’m guessing they didn’t have stabilisers? This Childs Penny Farthing dates from 1880. Early children’s bikes was one area of further research we discussed.

Many of the early owners of bicycles were rich young men, keen to let off steam and dare I say it, show off, the very first bike, the boneshaker was the perfect way for the regency man to show of his muscly legs in his finest breeches. Anyone who has worn breeches could tell you how little fun this would be and how likely you would be to do an “incredible hunk” and bust right out of them, never mind the poor washer women’s nerves at a time when light colours were very fashionable.

These machines were more like a scooter, powered by being pushing rather than pedalled along. This one is in fact a turn of the last century replica of an original (1904-7) It features a seat and a cushion for your arms, comfy…well it’s a nice gesture, like bunch of flowers for a hay fever sufferer.

The third penny farthing on show was a Rudge ordinary bicycle from 1884, this bike has been stripped down to be lightened for racing, the seat is basic and there is no stand to help you get on thing. This was a track bike, and in the workshop it was placed next to another track bike built for speed and stripped down to the basics.

This bike is Chris Boardman’s Lotus sport, the 2nd of the replicas of the original made by Lotus Engineering.

The two could not be more different, but they were both built to do the same thing, go as fact as possible, and the more we discussed this the more we started to see similarities.

One of the starkest contrasts is the position of the rider, which has changed dramatically, what has not changed is the total lack of fear needed to go at top speeds on these bikes, which don’t bother with niceties such as brakes.

Mind you having fallen off my Pashley, thanks to the combination of speed and brakes in the last week I’m starting to see the sense in the Bicycle messenger mantra “brakes are death” or at least my poor skinned legs are.

A big Thank you to Anna Watson for letting me use the picture at the top of the page, see more of Anna’s pictures on her flicker page, including more on the The Life of the Bicycle Film project: 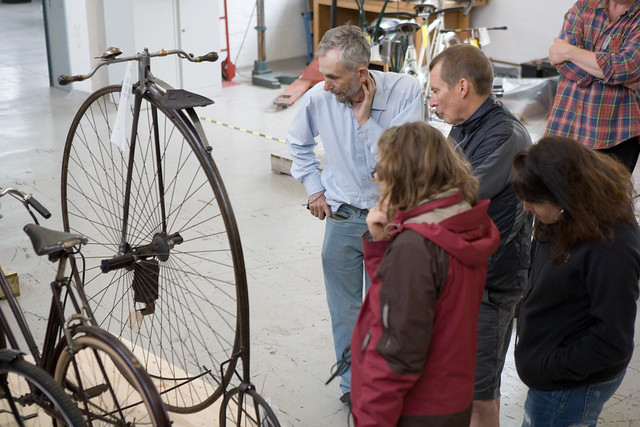 Find out more about the HLF funded Life of the Bicycle project:

My next post, part two of three on this trip, will explore one of my favorite topics, female cyclists.